Peace and Joy to you and yours! 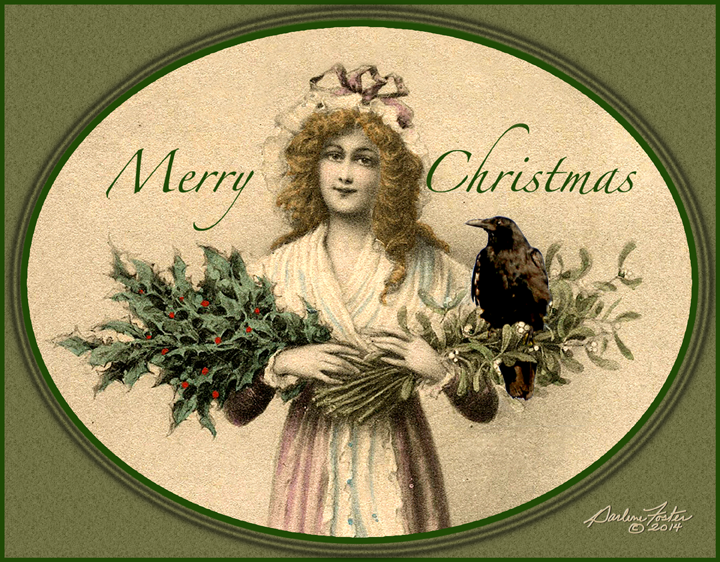 Posted by Darlene at 1:16 PM No comments: Groundhog Day ©2014 -The first documented American reference to Groundhog Day can be found in a diary entry of Morgantown, Pennsylvania storekeeper James Morris dated February 4, 1841:  "Last Tuesday, the 2nd, was Candlemas day, the day on which, according to the Germans, the Groundhog peeps out of his winter quarters and if he sees his shadow,  he pops back for another six weeks nap.   But if the day be cloudy, he remains out, as the weather is to be moderate."  Although it has origins in ancient European weather lore where a badger is the prognosticator, it also bears similarities to the Pagan festival of Imbolc, the seasonal turning point of the Celtic calendar which is celebrated on February 1st, about halfway between the winter solstice and the spring equinox.  My "Groundhog Day"  was inspired by a vintage photo of a beautiful little girl with a melancholy expression on her face that I picked up at an antique shop in Millford, NJ.   I placed her in an image I captured of a window in Lambertville, NJ along with a road through a field in Middle Valley, balloons from over Rt 202 around Flemington, a groundhog from my backyard and several crows from my travels.  Color was added to the girl (originally black and white) along with assorted filters and texture from an old daguerreotype.  Given her wistful look, I imagine she's hoping for a prediction of early spring from her groundhog while dreaming of blue skies full of magical balloons to whisk her away.

Posted by Darlene at 2:31 PM No comments: