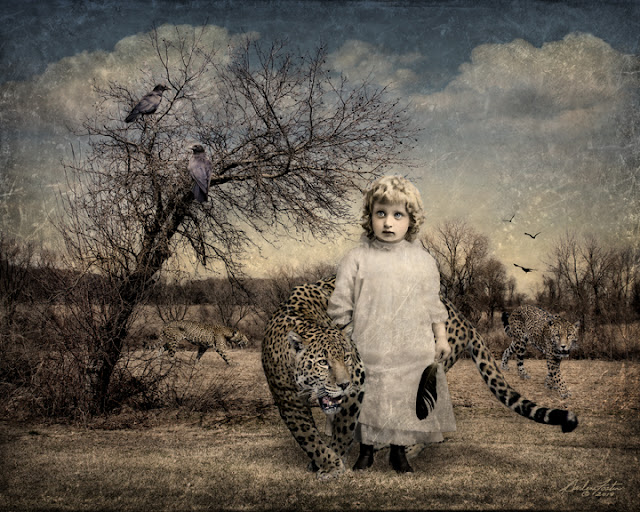 A Tender Trap ©2018 - When I found the vintage photo of the girl with the hypnotic eyes in an antique store, I couldn’t wait to use her in a new piece. Even so, I did wait, several months in fact, before the right elements and composition came together for this montage. The background image, with it’s quirky little bent over tree and rolling hills, was taken in northwestern New Jersey just before crossing into Pennsylvania.The Jaguars are residents of The Turtle Back Zoo in West Orange, NJ. These beautiful and powerful beasts were prominent in ancient Native American cultures. In some traditions, the Jaguar God of the Night was the formidable lord of the underworld. The name jaguar is derived from the Native American word “yaguar”, which means “he who kills with one leap”. The Mayans, Aztecs and Inca all worshiped the jaguar in some form. Unfortunately, today they have been eliminated from most of the United States due to habitat loss, over hunting and killings to protect livestock and are endangered in Central and South America. I finished the composition with some crows, clouds, and a large black feather (considered to be a sign of protection by angels). Texture, color and select filters completed the piece. The title was inspired by the 1955 movie, “The Tender Trap” which referred to love. In this case, it seems a trap of some sort is definitely being set; however, I leave it to the viewer as to who is doing the trapping, beauty or the beasts?