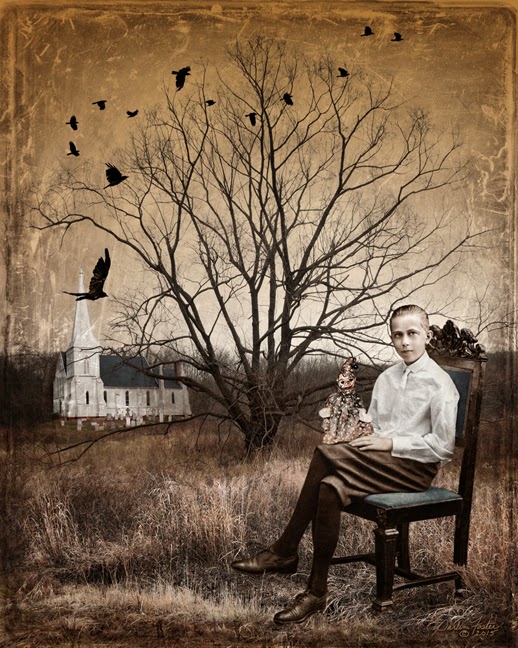 The Puppeteer ©2015 - This piece is a montage of 7 different images.  It began with the base photo of a graceful, bare tree in a grassy field against a stark sky captured on a trip to The Great Swamp near Meyersville, NJ.  Located in Morris County, this national wildlife refuge was established in 1960 and declared a National Landmark in 1966.  I added some additional grasses shot the same day to the foreground to create a perfect setting for the young man from my vintage photo collection.  The church nestled in the background is St. Peter's Episcopal Church in Spotswood, NJ.  It is one of the oldest churches in the diocese of New Jersey, dating to around 1758.  Some circling crows and a texture were added to create the atmosphere I was looking for, but the finishing touch that brought it all together is the quirky little clown puppet I picked up at an antique show.  He has a certain quality that straddles the fence between "good clown" and "evil clown" I needed to complete "The Puppeteer".
Posted by Darlene at 2:15 PM No comments: