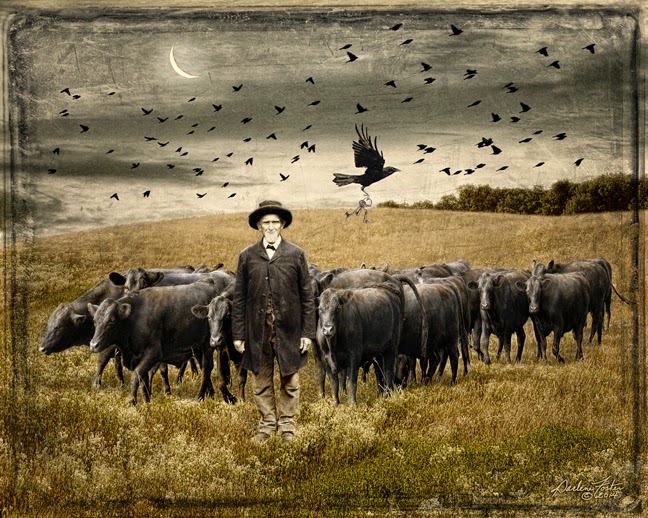 The Skeleton Keys ©2014 - Often images will sit in my files for months or even years before I decide to use one in a montage.  This one, however, was inspired by 3 images taken on the same day coming home recently from one of my favorite annual antique shows in Pottersville, NJ.  I came across a small herd of young black angus bulls grazing in a pasture near the town of Lamington.  The contrast of their dark coloring against the bright green grass caught my eye.  As I approached to photograph them, they moved closer and closer together until huddled in a small group as a seemingly protective measure.  Suddenly, they collectively moved towards me, which made me somewhat nervous until I realized it was just out of curiosity!  It was one of those shots that became my base photo.  I wasn't crazy about the bright green field the bulls were in, so I placed them in a rolling field of golden grasses from Rte 206 in the Peapack Gladstone area.  Traveling on, I stopped to photograph some horses and captured a large flock of blackbirds flying overhead that I added to the sky.  Some clouds, a crescent moon, and some texture from an old daguerreotype provided an evening feel to the image.  Leading the herd is a gentleman from my vintage photo collection and just above, a beautiful crow that's been hanging out in my neighborhood.  For a touch of mystery, he's carrying off "The Skeleton Keys" I found in the basement of my house when I moved there in 1977.
Posted by Darlene at 6:33 PM 1 comment: