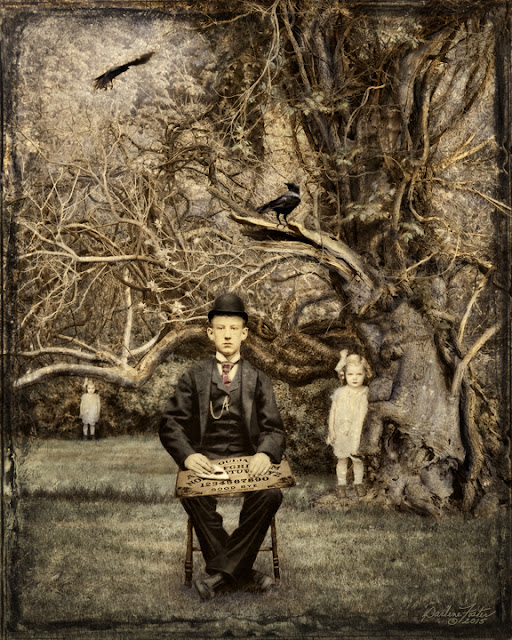 Let's Play a Game ©2015 - The base image for this piece was captured in the area of Stockton and Sargentsville, NJ. This gnarled and weather beaten old tree had such a magical feel about it, like something you would see in an illustration for Grimm's Fairytales. It provided just the right setting for the composition I had in mind. The vintage gentleman was part of a group photo but I decided he worked best alone for my purposes. He was in just the right position for holding a photo of my Ouija board that I've owned since the early 1970's. Ouija boards have their roots in a spiritualist movement in the 1840's led by mediums who claimed to be intermediaries between the living and the dead. In 1886, newspapers reported on a new "talking board" marked with letters of the alphabet, number 0-9, the words "yes", "no", "hello" and "goodbye" along with other symbols. Participants place their fingers on a small, heart-shaped piece of wood or plastic called a planchette. It then moves around the board to indicate a spirit's message. It was patented in 1891 by Elijah Bond and in1901, an employee, William Fuld, took over the production under the name "Ouija", a combination of the French and German worlds for "yes". It was popularized as a parlor game and remains so until today. However you feel about Ouija boards, they are always fascinating. Just ask the little girl who seems to have been summoned to play the game.
Posted by Darlene at 6:25 PM No comments: 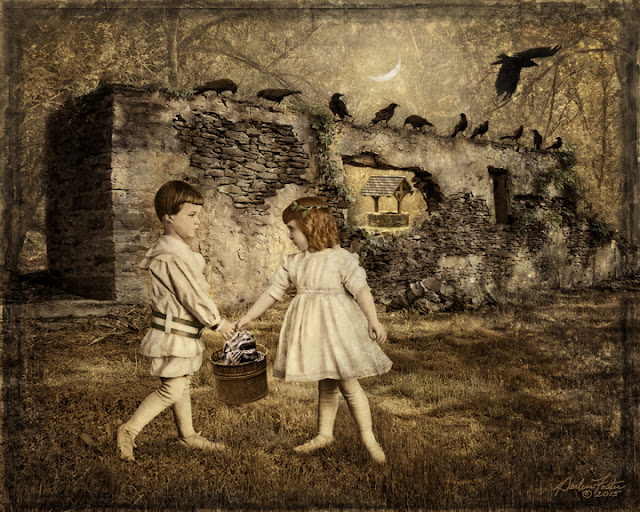 Jack and Jill ©2015 - When I came across the vintage photo of the boy and girl at an antique show, I immediately thought of Jack and Jill, so I had the title for this montage before it even began. It was a couple of months before the composition started to fall in place. I remembered photographing the ruins of an old stone building in Pennsylvania, just outside of New Hope that had a well on the property. Perfect for the background image! The true origins of the English nursery rhyme are unknown but there are several theories. One is that when King Charles 1 tried to reform taxes on liquid measure, he was blocked by Parliament so he ordered that the volume of a Jack (1/2 pint) be reduced but the tax remained the same, so he still received more tax, despite the veto. (Reminds me of what's happening today every time I grocery shop!)  Hence,"Jack fell down and broke his crown". The reference to "Jill", (actually "gill", or 1/4 pint) reflects that the gill dropped in volume as a consequence. In the vintage photo, the two children were only touching hands, so I photographed a pail and placed it between them. Fetching a pail of water seemed a little mundane, so I decided to have them fetch a pail of gargoyle instead! The crows were added as curious bystanders of the situation along with a crescent moon, some color and texture to complete "Jack and Jill".
Posted by Darlene at 6:14 PM No comments: