Night of the Iguana 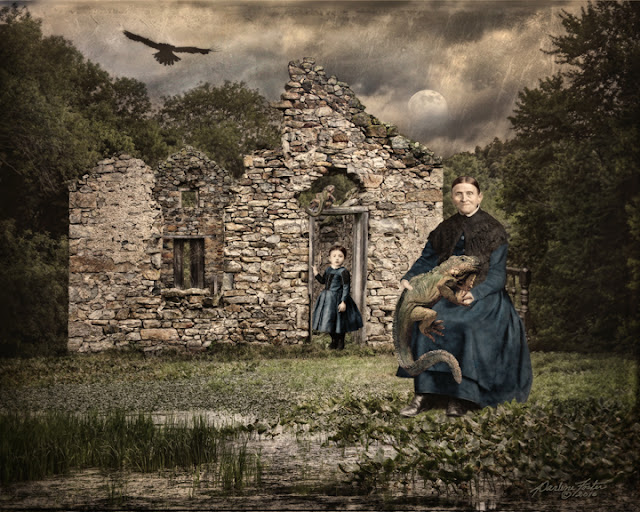 Night of the Iguana ©2016 - The title of this piece came from the play by Tennessee Williams, "The Night of the Iguana" but has little to do with the storyline other than the obvious inclusion of  iguanas. The background is a very marshy creek captured from a bridge in a small town somewhere between Allentown and Freehold, NJ. I came across the magnificent ruin of an old stone building in Warren County, NJ in Pohatcong Township. Unfortunately, there was no indication as to what it had been in it's previous life but it nestled nicely into my composition. What initially drew me to the older lady from my vintage portrait collection was the wisdom and contentment in her eyes, but she also reminded me of someone else. I searched my collection and there she was! A "mini me" of the older woman right down to her hairstyle! She fit perfectly into the doorway. The iguanas were not photographed from life but from a remarkably realistic sculpture that resides in my house. The most common type, the green iguana, is among the largest lizards in the Americas, growing to an average 6 feet long and weighing 11 pounds. Sometimes called "the benevolent dragon", they are quite gentle creatures, content with just being and appreciating the simplicities of life. Perhaps reflecting on her childhood and how far she has come, the woman has learned these lessons of the iguana well; being at peace with herself in the here and now and realizing that everything she needs already surrounds her. After adding a majestic vulture gliding overhead and some clouds in the night sky, I placed the June solstice full moon from June 20, 2016 peeking over the clouds. It's the northern hemisphere's first summer solstice full moon since 1967, aka The Summer of Love, with all it's magic.
Posted by Darlene at 6:17 PM No comments: