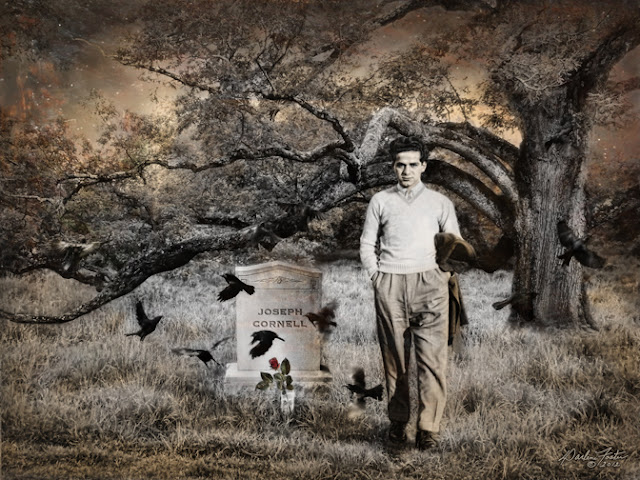 A Guy Named Joe ©2012 - This image was inspired by a conversation with my friend and incredible artist, Marcel Truppa.  I asked who he considered his greatest influence and he immediately answered Joseph Cornell. Influenced by the Surrealists, Cornell was one of the pioneers of assemblage and created beautiful art from found objects. He and Marcel became friends during the 50's and he recollected that every time he visited Cornell at his home, there was always a single rose in a glass of water somewhere in the house.  After Cornell passed away, Marcel would visit his grave in Nyack, NY whenever he had the opportunity and would always bring a single rose.  Marcel remembered Cornell as a quiet, unassuming man who, despite the fame his art eventually brought him, was just "a guy named Joe".  The figure in this image is a young Marcel.  The background is not the actual gravesite of Cornell, but my interpretation utilizing several different images of my own as well as a texture in the sky from one of Marcel's paintings to complete the montage.
Posted by Darlene at 11:43 PM