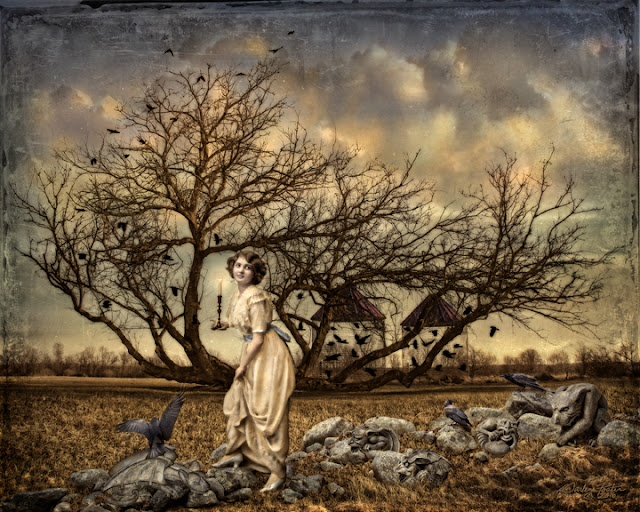 Tread Lightly at Twilight ©2016 - Twilight is absolutely my favorite time of day. The soft, diffused light from the sky when the sun is below the horizon and a few stars become visible has a magical quality not present at any other time. The rhythm of the day is fast paced and measured by the hands of the clock, but the rhythm of the night is meditative and measured by the movement of the moon. Twilight, or "half-light", hovers between the two signaling the death of the day and the birth of the night with all it's dark secrets. The background image of this montage was in reality captured a little earlier in the afternoon around Sergeantsville, NJ. I was fascinated by the tree whose trunk seemed to grow horizontal along the ground before swooping upward. The wire mesh containers behind the tree are probably corn cribs used to dry corn, but I chose to fill them with a murder of crows exiting into the sky. Clouds were added along with selected filters and texture to simulate that hazy, watercolorish time between day and night. The young lady from my vintage photo collection was actually climbing some steps carrying a basket of flowers, but I replaced the flowers with a candle to light her way and added some grasses and stones to her path in the foreground. Hopefully, she treads lightly through the gargoyles (trying to camouflage themselves among the stones) as she makes her way through the twilight zone to a romantic tryst.