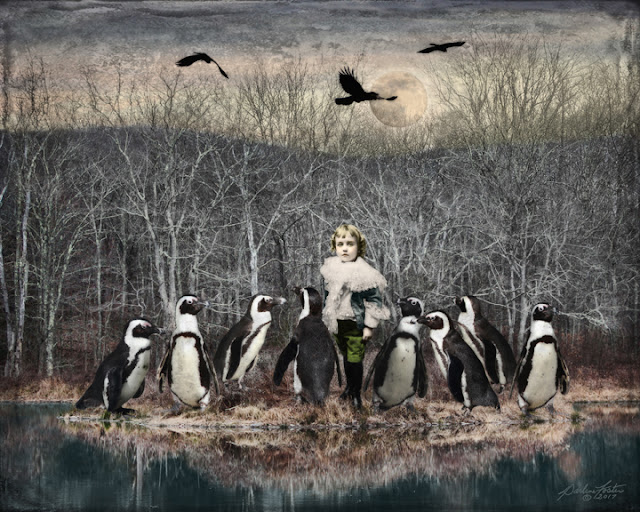 Penguin Dreams and Stranger Things ©2017 - The title for this piece came from a book by my favorite cartoonist, Berkeley Breathed, published in 1985. I fell in love with the character, Opus the penguin, when I first discovered his comic strip, "Bloom County". I photographed these  adorable, tuxedoed  Humboldt penguins at the Turtle Back Zoo in West Orange, NJ. The Humboldt is a South American penguin that breeds in coastal Chile and Peru. It gets it's name from the cold water current it swims in which itself is named after the explorer, Alexander von Humboldt. Although we tend to think of a penguin's striking coloring as elegant, it is actually a matter of camouflage; from above, it's black back blends into the murky depths of the ocean while from below, it's white belly is hidden against the bright surface. Considered marine birds, penguins live up to 80 percent of their lives in the oceans of the Southern Hemisphere. It is a common myth that they all live in Antarctica. In fact, the Galapagos penguin lives on tropical islands at the equator. However, in the case of my little colony of Humboldts, I've placed them on a tiny island in the Delaware Water Gap in New Jersey where they are joined by a young gentleman from my vintage photo collection who is dressed as elegantly as they are. I added a cold, full moon rising in the background behind the trees, some clouds and several crows gliding overhead. Assorted filters, texture and color created the mood and atmosphere I wanted to complete the piece.
Posted by Darlene at 8:06 PM