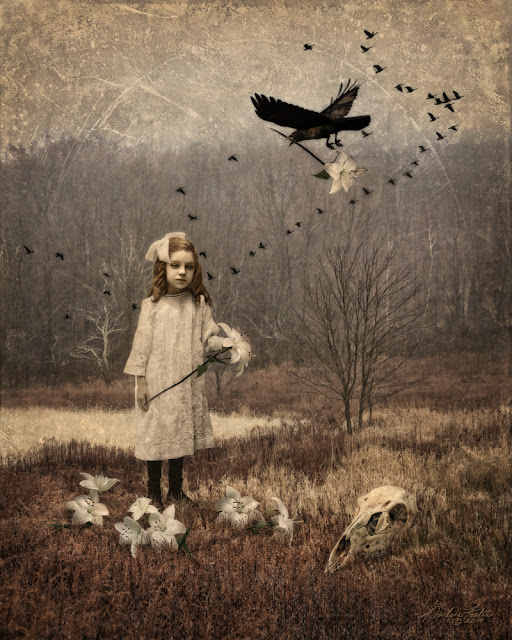 Requiem ©2019 - The background image of this piece is a rolling field of multi colored grasses captured in the area of Washington Township in Morris County NJ. The wall of bare trees at the rear was blanketed with fog that was hovering over the entire area that day providing an eerie, unearthly kind of mood. I caught the flock of geese on a nearby lake just as they were taking flight into formation. There is an abandoned property in that area, specifically Middle Valley, NJ, that I have photographed several times over the years so I stopped by to do an update and see what changes may have taken place since my last visit. As I wandered through, something white  caught my eye in the underbrush beside the path. It was the skull of what appeared to be a deer. Upon closer examination, the rest of the skeleton seemed to also be there, partially submerged in mud. I decided at that point that at least the skull (which was in remarkably good condition) would find a new home at my house. After a bit of cleaning, it was ready to be photographed for its second life as an art subject. The young lady in mourning was restored from my vintage photo collection, the lilies are from a recent bouquet whose intoxicating fragrance permeated my house for days, and the crow is one of many I’ve captured in my travels. Color, selected filters and texture were applied and the Requiem began.

You fell sometime ago
with no one near to witness
or mourn your end.

Even creatures who roam
the lonely woods should be
remembered; and so I bring
lilies, pale as the moon.
A requiem for your lovely bones.